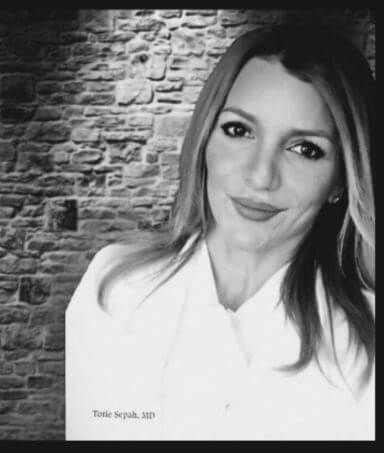 Torie Sepah, MD was born in Iran and immigrated to to the US at the age of seven, in the aftermath of the Iranian Revolution. She grew up in the SF Bay area, primarily in the city of South San Francisco. For undergraduate university, she headed southward to UCLA, majoring in Poli. Sci., graduating Magna Cum Laude. She worked for several years in publishing, including as the Assistant Editor of Ms. Magazine in NYC during which she wrote the “Health”, sparking her interest in science, health and ultimately medicine. She went on to complete a two year post-baccalaureate, pre-medical program and was accepted at Tulane School of Medicine in New Orleans, LA. Dr. Sepah and her husband, Ron Shatzmiller, a neurologist and co-partner of PNC, met at Tulane and married as second and third-year medical students, respectively. She received her Doctor of Medicine in 2006, completed her Internship year in Family Medicine at Kaiser-Los Angeles Health Center, and Psychiatry residency at USC + LAC in 2013. She served as Chief Resident in 2012 and is a Diplomate (“Board Certified) of the American Board of Psychiatry & Neurology in General Psychiatry.